Walking alone off the beaten path, I get to travel to Hollywood. In spirit at least. Along the way, I’ve found it beneficial to take with me a collection of go-to podcasts. Time and attention, the commodities most of us have too little of, can be impediments to the podcasting world. But because walking is a pretty regular retreat for me, I’ve found a way to circumvent these two thieves.

Here’s a look at one film noir podcast that helps me get there: 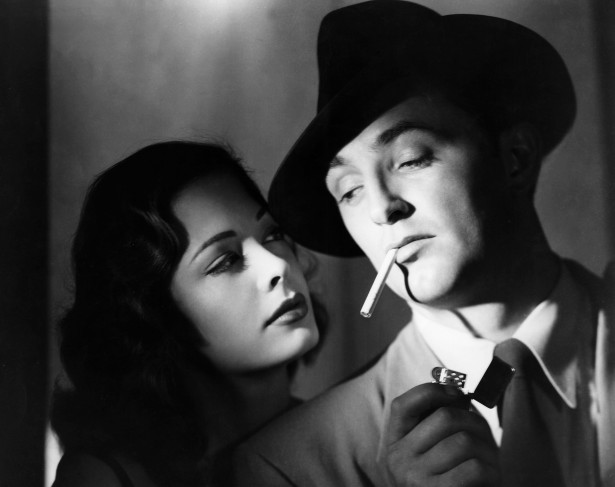 Out of the Past: produced by academic colleagues Richard Edwards and Shannon Clute, this podcast is the standard bearer of, in their words, the “canon of film noir” podcasts.

The series debuted in 2005 and ran until 2011. There were a few random episodes after 2011, but for all intents and purposes, the series ended with Episode 53: Out of the Past Act II.

Clute and Edwards cover most of the films from the noir Golden Age, in addition to discussing many “neo-noirs.” Each episode runs approximately 30-45 minutes in length and they don’t rely on the over-production audio gags too often heard in many podcasts today. These are two colleagues who know and respect their material and never speak down to their audience.

Listening to this podcast became my baptism into the world of film noir. I had always been interested in the films of this, dare I say “genre,” but the hosts helped me come to terms with what I found so intriguing about these classics. Their podcast takes a somewhat scholarly approach to the material without in any way coming off as pedantic. The episodes are easy to listen to and very approachable for all fans of these groundbreaking films.

As a side note for the many podcasters out there, both men were able to parlay the success of their efforts into new career directions. Richard Edwards is currently the Executive Director of iLearn Research at Ball State University and Shannon Clute is Director, Business Development & Strategy at Turner Classic Movies. So keep following your passions.

Here are links to some of my favorite episodes:

4 thoughts on “Walking to Hollywood: Podcasts for Noir Heads”